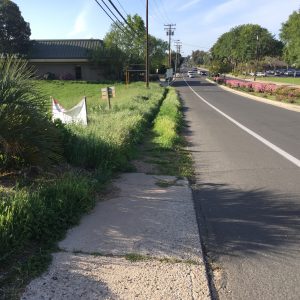 As part of the City’s efforts to improve travel of all kinds (pedestrian, bicycle and automobile) around town, improvements will be made to the area on north Fairview Avenue near Fairview Gardens (at Stow Canyon Road) and the Goleta Valley Library. Currently, there is no sidewalk between the Library and Fairview Gardens. The City Council awarded a construction contract to Lash Construction, Inc., at the January 15, 2019, City Council meeting for the Fairview Avenue Sidewalk Infill at Stow Canyon Road Project.

The project will construct the sidewalk in front of Fairview Gardens and 370 feet south heading towards the Goleta Valley Library. Other improvements include widening Fairview Avenue to include a second northbound travel lane, and adding a 5-foot wide bicycle lane and a 5-foot wide sidewalk. In addition, a pedestrian crosswalk will be installed across Stow Canyon Road that will have ADA compliant curb ramps and a streetlight. Construction will begin later this month.