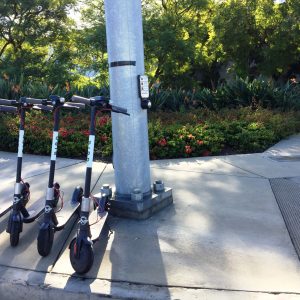 The City Council voted unanimously to ban shared on-demand motorized scooters in Goleta at the December 4, 2018, Council meeting. The City received more than 200 public comments in advance of the item, the most ever received on a single topic, and the Council heard numerous speakers at the meeting.

These scooters have become a hot topic in Goleta with vendors dropping off scooters within Goleta City limits without permits. The idea is that these scooters provide an additional form of alternative and convenient transportation, however, the City has received multiple complaints from residents and business owners. Some users were not following the law when riding the scooters, they were sometimes left haphazardly in the public right-of-way obstructing pedestrian travel, some members of the public were concerned that they caused visual impacts and they can present an operational safety hazard for riders.

The passing of the City of Goleta’s urgency ordinance is effective immediately and prohibits shared on-demand motorized scooters from being offered for use anywhere in the City. This does not prevent the City from creating a future regulatory framework which would eventually allow the scooters to be used within City limits. But for the time being, they are banned. With the urgency ordinance, the City’s public works crew is collecting and impounding all motorized scooters in Goleta that are not otherwise picked up by the vendors. If you see any in the public right of way, you can let the City know through the online City Assist program (please submit it under “Ask a Question”). At the meeting, Council directed City staff to work with the Santa Barbara County Association of Governments (SBCAG) and neighboring entities on regulations for a shared scooter program. Staff was also directed to work with police services on an enforcement and education plan.

Watch the Council discuss this topic and view the staff report at https://tinyurl.com/GoletaMeetings.