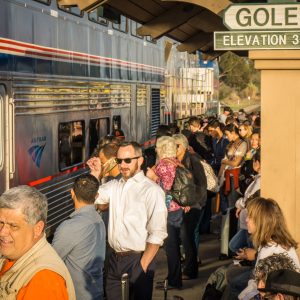 Beginning April 2, 2018, the morning hours of Amtrak’s Pacific Surfliner will change to better accommodate commuters in Ventura and Santa Barbara Counties. With the new schedule, the Pacific Surfliner will arrive in Santa Barbara at 6:47 a.m. and Goleta by 7:16 a.m. The southbound afternoon train will continue to depart at its current time, leaving Goleta at 4:25 p.m. and Santa Barbara at 4:40 p.m. To help people get to their workplace after arriving at the Santa Barbara and Goleta train stations, Santa Barbara MTD will run free shuttle buses to worksites in downtown Santa Barbara and Goleta, including Cottage Hospital locations. Anyone looking to bike to work from the train station can use the free bike lockers that will be available. Those interested in riding the train can take advantage of Santa Barbara County Association of Governments’ (SBCAG) special pricing instead of paying normal Pacific Surfliner fares. In addition, SBCAG Traffic Solutions is offering a free trial 10-ride or monthly pass throughout the month of April 2018. Get more information at www.trafficsolutions.org/Commute-by-Train.