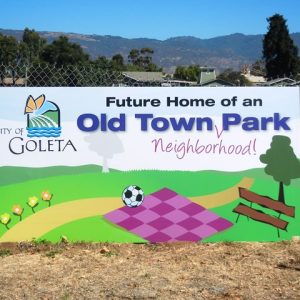 Although the Goleta Water District (GWD) currently imposes a State III Water restriction that would prohibit the use of outdoor water features, such as fountains, splash pad, etc., City Council voted to retain the feature in the proposed design. The planned splash pad would use well below the yearly amount of water the GWD allocates for the park property, but the structure itself is off limits for use at this time.

The California Department of Parks and Recreation has approved the final design as part of the grant requirements for the $910,000 that was awarded to the City of Goleta for construction of this park. The next steps are for the landscape architect to work on completing the construction documents required for this park, which are currently under way! The project will go out for bid once construction documents are complete and the City has acquired title to the property. The site was formerly owned by the City’s Redevelopment Agency so the City needs approval from the State Department of Finance before it can acquire title to the park property.

Read the full Staff Report and view the presentation here.  Learn more about this project at http://cityofgoleta.org/projects-programs/parks-open-space/old-town-park and sign up to receive Old Town Park updates from the City here.