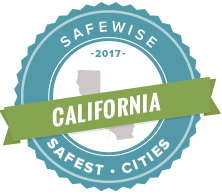 The City of Goleta received its second award this year for being one of the safest cities to live in California! This is the 4th year in a row Goleta has received this honor from SafeWise, a community-focused security organization committed to increasing safety education, awareness, and preparedness. SafeWise compiled its “50 Safest Cities in California” report using the most recent FBI crime data from 2015 to analyze and rank cities with a minimum population of 10,000 people. The cities that made the list had much lower violent crime and property crime rates than the national average. View the full press release and Goleta’s previous safe city awards here: http://ow.ly/OD6230dcW10.