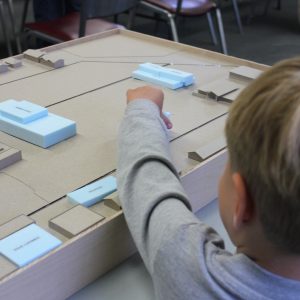 A new civic center design is in the works in the heart of Goleta. A two-day event was held at the Goleta Valley Community Center (GVCC) in Old Town to gather input from the community. Attendees viewed the various exhibits prepared by the architects; they particularly enjoyed a model of the site that allowed them to move around mock buildings, including a future City Hall and other ancillary structures. The public engaged in discussions with staff and the architects about various layouts, programming and uses and the general shape and size of the buildings. Model arrangements that were created during the event were shared at a wrap up presentation with an explanation of the possible pros and cons of each layout. 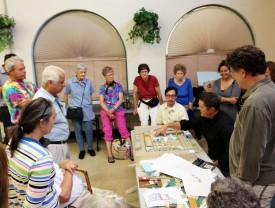 The ultimate product of this current phase will be a Civic Center Feasibility Study that includes:
– A review of existing facilities
– Sizing of a suitable City Hall building on the GVCC site
– An analysis of reuse opportunities
– Identification of site constraints
– Cost estimates for building construction and public improvements
– A conceptual design for a future City Hall or Civic Center

The study will also include the potential acquisition of the adjoining 2.8 acre site owned by the Goleta Union School District and how that property might be incorporated into development of a Civic Center.

The event was a success and attendees said that the process was very informative and provided an interesting, interactive forum for public participation. As a result of the two-day design event and other public input, another special meeting may be conducted with the City Council in early September to discuss the process to date, as well as the concept plans that are being developed.