In honor of Mother’s Day and Mental Health Awareness Month, the Goleta Library is pleased to host Conversation with an Author: Thoughts on Motherhood, Mental Health, and Moving Forward When Life Goes Off-Script, on Sunday, May 22, from 3:00 – 4:00 p.m. with local author Valerie Cantella. The library is located at 500 N. Fairview Avenue.

In this interview-style program, Ms. Cantella will share about the experiences which led her to write Off-Script: a mom’s journey through adoption, a husband’s alcoholism, and special needs parenting. Join this honest and authentic conversation about thought-provoking topics followed by Q&A.

Goleta Library Director Allison Gray said, “We’re thrilled to be able to gather in person again and to offer this program to our community. With the widespread impacts of the pandemic on mental health, we are pleased to be able to raise awareness and bring attention to this important topic, particularly through one of our local authors.”

Ms. Cantella is a Goleta resident and has served the community as a former City of Goleta employee and on the Goleta School Board.

Many people fantasize about their futures: a loving family, a dream job, and a house with a white picket fence. These dreams often turn into expectations for “happily ever after.”

For Valerie Cantella, childhood hopes of a soul mate, children, and a fulfilling career turned into a script … written and edited to perfection. But life did not follow her plan.

A lifelong battle with Type 1 diabetes, the unfolding trauma of mental health crises with a special needs adopted daughter, and her husband’s struggle with alcoholism shattered her childhood dreams. And nearly crushed her.

But sometimes, an off-script journey takes you through the unimaginable to where you were meant to be all along—amid hope and healing.

Southern California Edison and Electric Drive 805 invite you to attend a free webinar for multi-family property owners and managers who are interested in installing electric vehicle chargers at their properties. Learn about how you can use Southern California Edison’s Charge Ready program, as well as other local incentives, to help offset the costs to purchase and install EV chargers. This 45 minute webinar will take place on Tuesday, May 24 at 1:00 p.m. Register here.

The State Lands Commission (SLC) met for the first time in Santa Barbara County in April and we were honored to host them at the City of Goleta’s Council Chambers. The location was fitting, given the City’s ongoing partnership with the SLC on the plugging and decommissioning of historic wells and oil and gas infrastructure along Goleta’s coast. Mayor Paula Perotte began the meeting by welcoming the Commission and acknowledging this important partnership. The April meeting was also the first hybrid SLC meeting where the public participated both in-person (in the City of Goleta) and virtually.

Before the meeting, the public was invited to participate in a field trip that included two site visits. The participants went to Rincon and Piers 421 oil and gas decommissioning sites. Both site visits were well attended and a terrific opportunity for the community to see the work the Commission is doing to decommission oil and gas operations.

The Commission expressed its gratitude to the City of Goleta for hosting the Commission and to Mayor Paula Perotte for welcoming the Commission. During the meeting, the Commission issued dozens of new leases and permits that authorize the use of sovereign land in Northern California, the Bay/Delta area, and in Central and Southern California. The Commission also exercised its oversight authority over legislatively-granted lands by considering several tideland trust expenditures, and exercised its fiduciary responsibilities related to the oil and gas operations on granted lands in the City of Long Beach. A couple of other highlights are below:

Pier 421 (Ellwood piers in the city of Goleta) Decommissioning Project

This project is the Commission’s first major decommissioning project in the Ellwood Fields offshore Santa Barbara. The Commission certified an Environmental Impact Report that analyzes the environmental impacts of removing two oil piers and the connecting access roadway. The two derelict piers are the last vestiges of pier-based oil production in the Santa Barbara Channel. The Commission approved the removal of the piers, which reside on public lands, and will continue to facilitate solutions to funding future removal of the roadway. The project will remove beach obstructions, eliminate potential long-term hydrocarbon releases from contaminated soil, improve water quality, and increase public access to the beach.

For more information on the State Lands Commission, visit https://www.slc.ca.gov/. 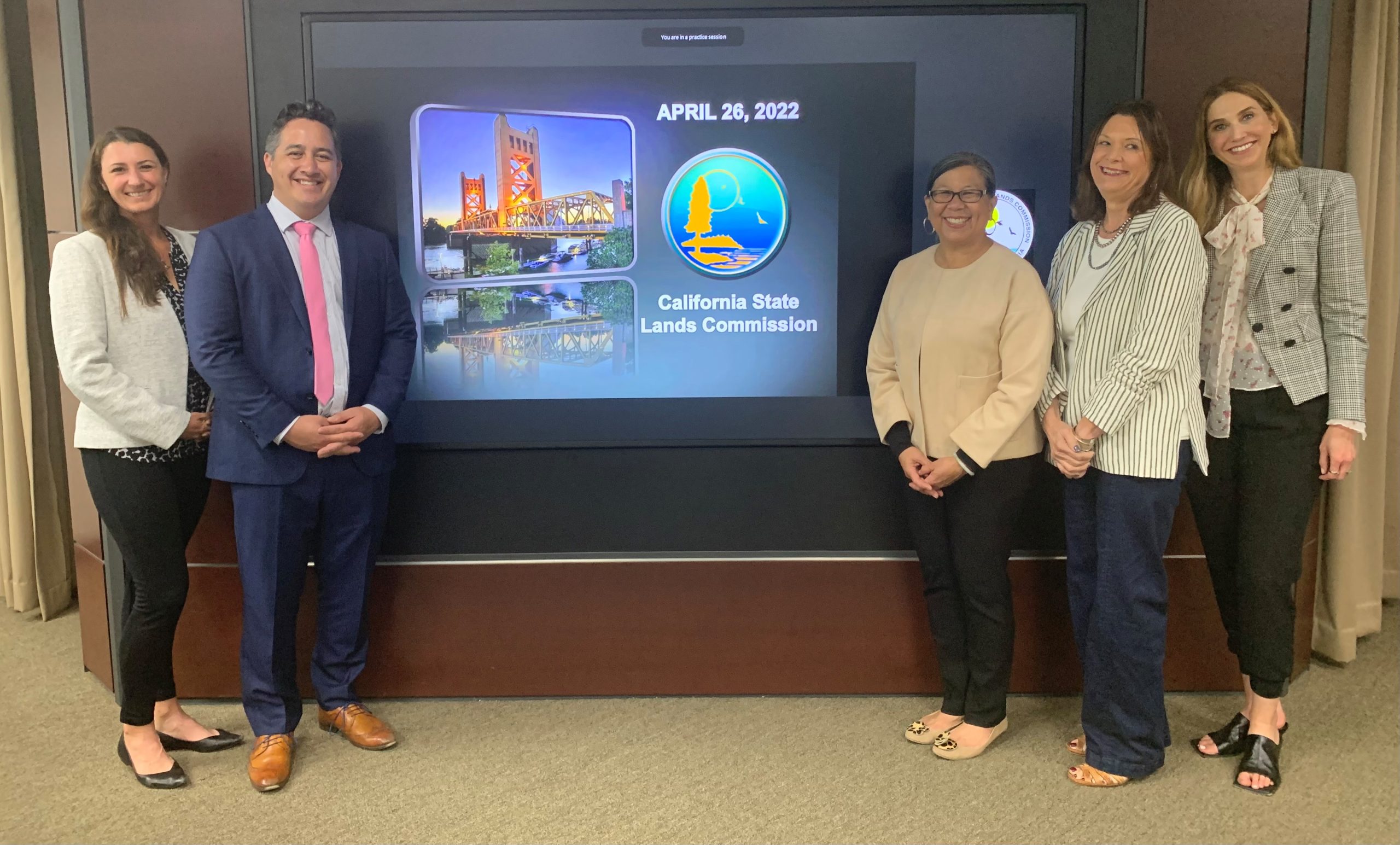 In addition to our Community State of the City, we were also pleased to have participated in a first of its kind event. On April 27th, the Santa Barbara South Coast Chamber of Commerce presented the State of the City from Goleta to Carpinteria on Wednesday, at the Hilton Santa Barbara Beachfront Resort. It was an honor for Mayor Paula Perotte and our Finance Director Luke Rioux to present to the business community. Thank you Santa Barbara South Coast Chamber for putting on this informative event. We learned a lot and hopefully provided some insight into how the GoodLand is doing.

A recording of the event will be available soon. View event photos here. 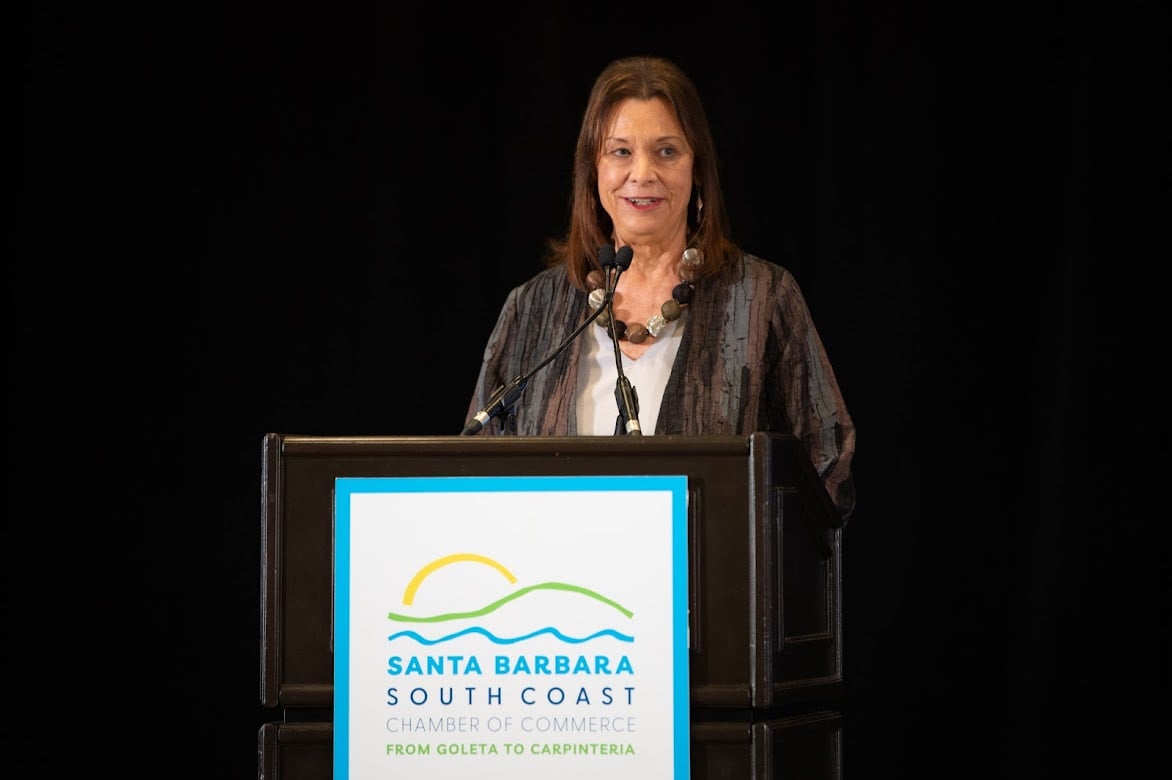 Mayor Paula Perotte speaking at the State of the Cities 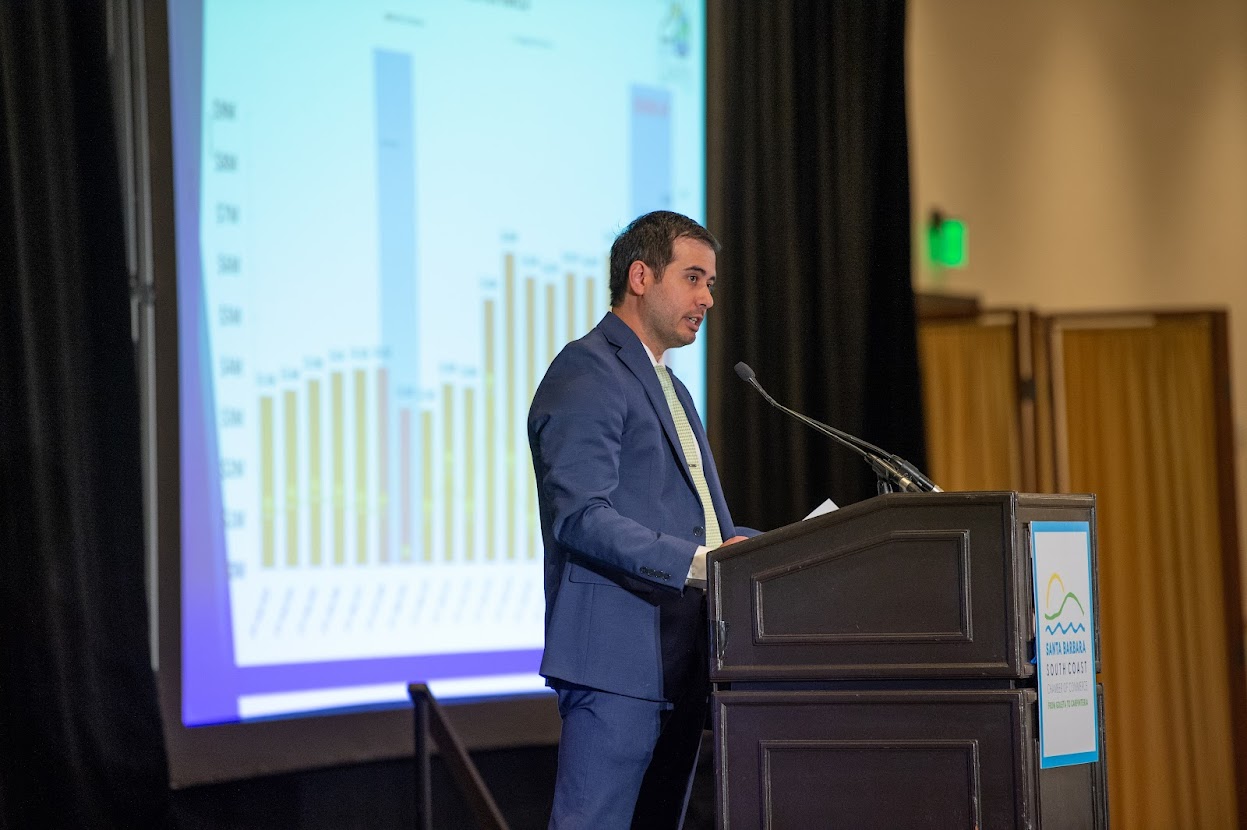 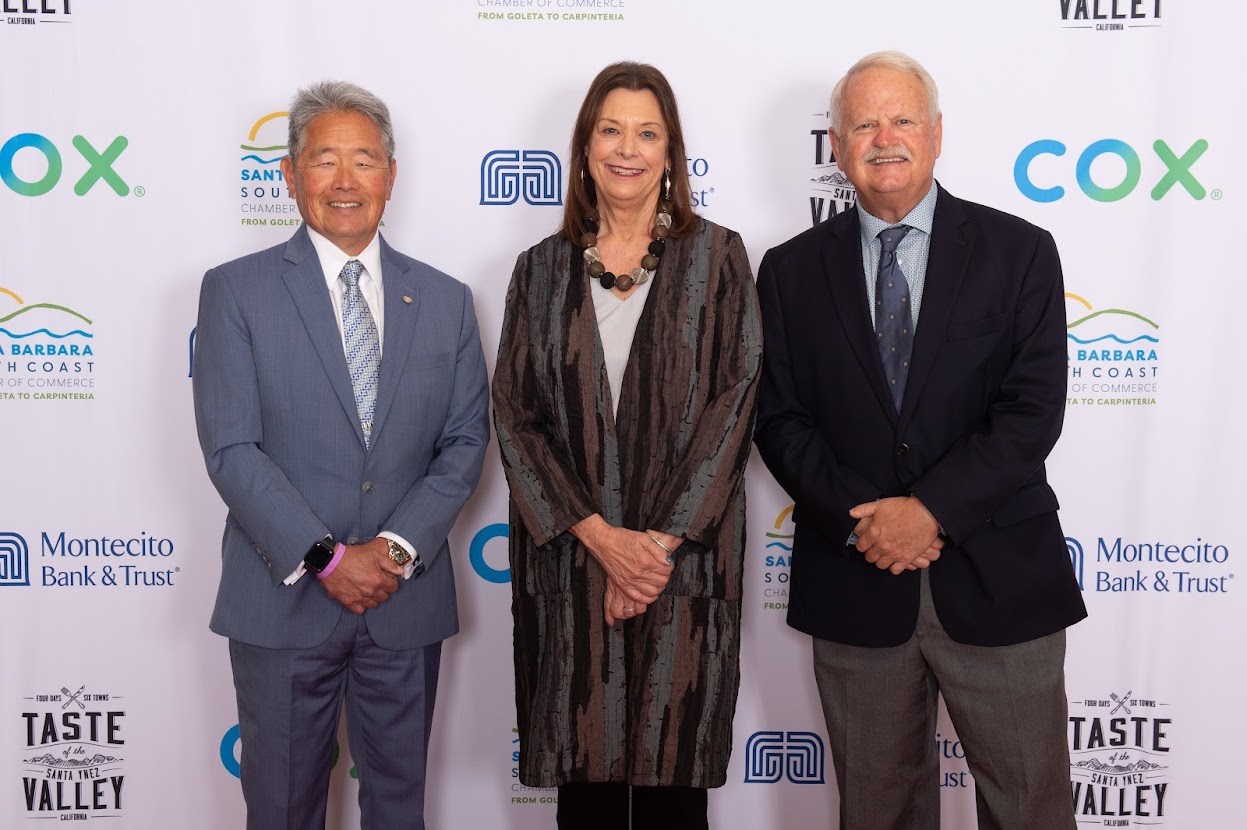 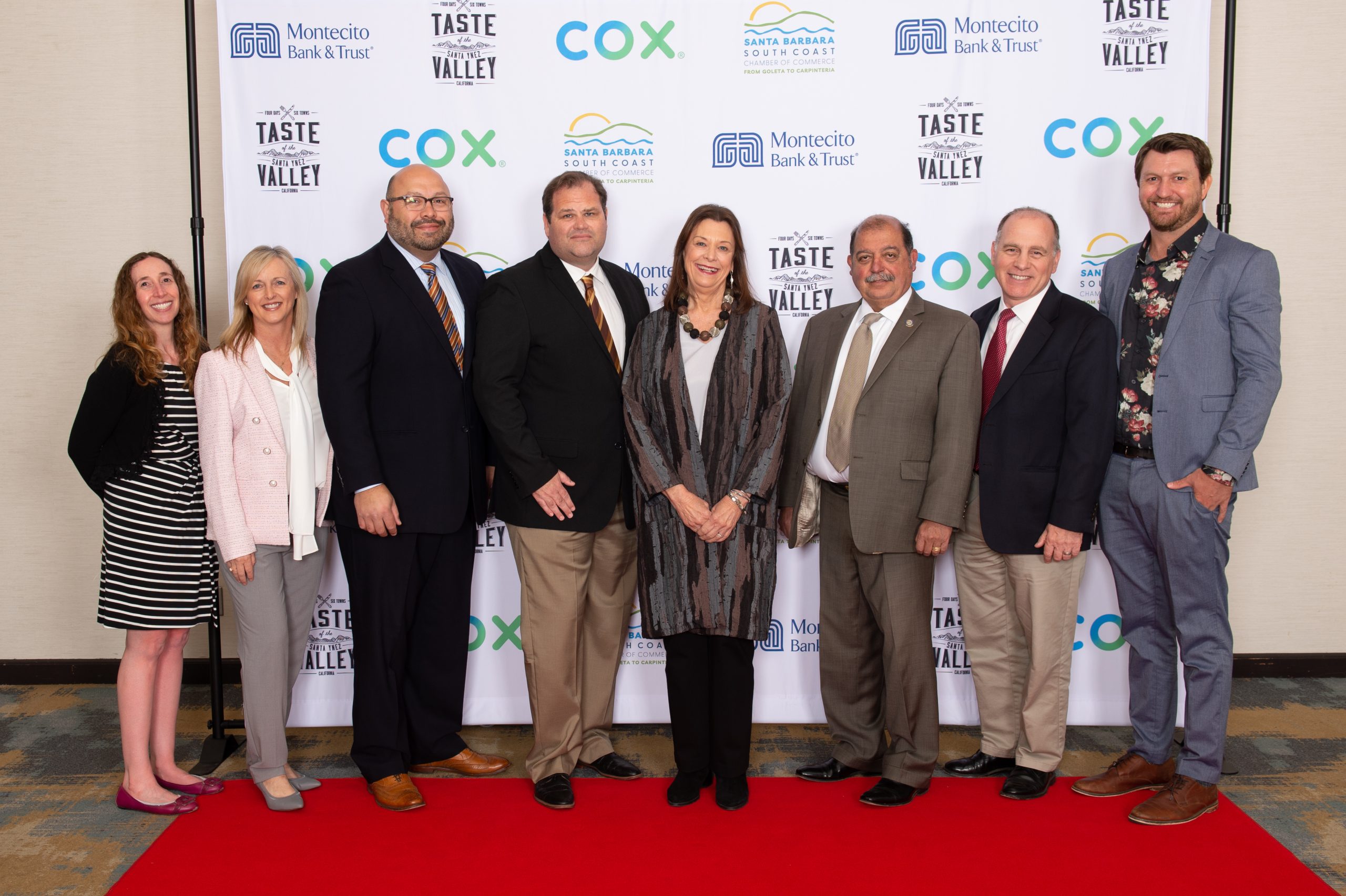 Thank you to everyone who came by the Farmers Market at Camino Real Marketplace on Sunday, May 1, and stopped to talk to City of Goleta Mayor Paula Perotte and Santa Barbara County Third District Supervisor Joan Hartmann. They had many engaging conversations with community members and were glad to have the opportunity to answer resident questions and concerns. Stay tuned for other opportunities to meet the Mayor and Supervisor Hartmann.

If you are driving by or coming to City Hall or Council Chambers over the next two weeks you will see painters at work, but come on in, we are still open for business! The painting will not impact our operations and we look forward to seeing you.  We also look forward to showing you the finished paint job when it is complete!

City Council proclaimed May as National Community Action Month at their May 3 City Council meeting in honor of CommUnify’s 55 years of service. CommUnify, formerly Community Action Commission, was incorporated in 1967 as a private nonprofit organization devoted to creating opportunities for Santa Barbara families to achieve economic stability as an essential aspect of enabling and enhancing a stronger and more resilient Santa Barbara County. CommUnify has improved countless lives and continues to work toward ending poverty in Santa Barbara County. Read the proclamation here: https://tinyurl.com/3xevy3nx and watch a recording of the City Council meeting here.

Mayor Perotte was honored to present the proclamation to CommUnify Chief Executive Officer Patricia Keelean. Patricia said, “Thank you so much for this recognition this evening. May is a significant month for CommUnify for two reasons. First, it is Community Action Month. Second, it marks CommUnify’s 55 years of service to Santa Barbara County. Since we started we have grown to provide 17 different programs. Every year CommUnify serves over 8,000 disadvantaged children, teens, families, and seniors providing services that educate and support them on their personal journey to becoming economically stable and self-sufficient. On behalf of our Board of Directors and staff, thank you for helping us celebrate 55 years of service, and we look forward to the next 55 years.”

The Santa Barbara County Elections Office is seeking volunteers to serve on Election Day, June 7, 2022. Volunteers are paid a stipend for their service.

For more information go to www.countyofsb.org/1006/Election-Officer-Information.

You can visit all five library locations during their new operating hours which started the week of May 2:

The Goleta and Santa Ynez Valley Libraries are pleased to be able to offer the new California State Library Parks Pass to patrons. The new pass will allow free vehicle day use entry at more than 200 participating state park units.

With the California State Library Parks Pass, anyone with a library card will be able to unlock the benefits and beauty of our majestic state parks.

Research shows that spending time in the outdoors is associated with better mental and physical health, and that many Californians face barriers to accessing their parks. California has a wealth of state parks, and many public libraries are likely within driving distance of one. By reducing barriers to park access and partnering with entities such as public libraries, the goal is to help more Californians explore the outdoors and generate positive impacts in the area of health, natural resource stewardship, and historical and cultural connections.

As part of a three-year pilot program, the Goleta and Santa Ynez Valley Libraries will receive 13 California State Library Parks Pass hangtags for checkout by library patrons, including mobile libraries. There are currently three Park Passes in circulation for checkout by library patrons and we expect to receive the remaining 10 during the month of May. Library users can contact their local library for more information. Library-card holders will be able to check out the pass for 21 days, then return the pass to the library for others to use. The pass is valid for entry of one passenger vehicle with capacity of nine people or less or one highway licensed motorcycle at participating state park units.

Libraries are already an important part of Californians’ lives. There are 1,184 public library buildings in California, and more than 23 million Californians have library cards. In 2019-2020, these libraries circulated over 97 million items free of charge, such as books, technology, Wi-Fi hotspots, videos, music, instruments, tools, telescopes and more. Additionally, the libraries hosted over 300,000 programs in 2019-2020, with almost 7.5 million people attending.