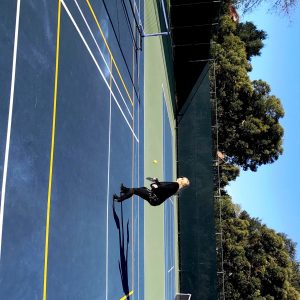 Today, the courts at Evergreen Park are designed for both tennis and pickleball players.  The west court is designated as priority for tennis players, and the east court (with added yellow lines) serves as priority for pickleball players.  To keep the pickleball court nets in good condition, they are secured in a locked box at the courts. Pickleball players desiring access to the portable nets will need to participate in a training and complete a volunteer application before receiving the lock combination.  Interested parties can contact JoAnne Plummer, Parks & Recreation Manager, at (805) 562-5505 or jplummer@cityofgoleta.org.