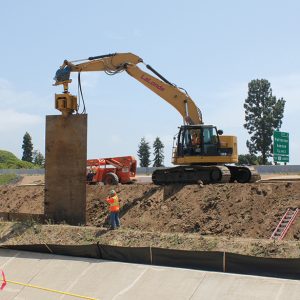 … a number of active projects within the City of Goleta.

Here’s a short update on some of them (as of early September):

Hollister Avenue Bridge Replacement This project is phase 2 of the San Jose Creek Project and will replace the bridge over the creek on Hollister Avenue. This is in the preliminary engineering and environmental review phase and will likely begin in late 2014 or early 2015.

Ekwill Fowler Roads Extensions Project This project to improve traffic circulation in Old Town is in final design, and the City is working with external agencies on permitting. The anticipated start date is late 2014 or early 2015.

Los Carneros Overhead Bridge Replacement Project This project will replace the Los Carneros overhead bridge. The construction contract will likely be awarded this fall, and the project will begin soon thereafter. Methacrylate Deck Sealing Project The City will be sealing seven bridges to prevent further water damage. Completion will take place over several weeks during the fall.

A number of other projects are in the works, including:

• A flashing beacon on Cathedral Oaks at Santa Marguerita

• A HAWK signal on Hollister Avenue near Wendy’s

Project descriptions and information can be found at www.ProjectGoleta.com.

Some of the private projects within the City include:

Cabrillo Business Park  The public roadway improvements and landscaping on Hollister Avenue and Los Carneros Road have been completed. The first four buildings of the business park will be ready by early 2014 for the new world headquarters of Deckers Outdoor Corporation. The new traffic signals at Coromar Drive and Discovery Drive should be activated later this fall.

The Hideaway/Haskell’s Landing On the western end of the City, 101 units will be built near the Winchester Canyon exit off Highway 101. These will include single family, duplex and triplex units. Five model units are under construction and will be ready by the end of this year. The remaining units for sale will be built out over the next year or two in response to sales demand.

Target The Target Corporation completed their application requirements with the City in August. The next step is the completion of an environmental review document (EIR). This process takes approximately a year.