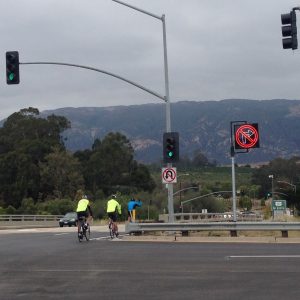 On Wednesday, July 24, the City will hold the first of two public workshops on the Goleta Traffic Safety Study. Join us from 6:00 – 7:30 p.m. at the Goleta Valley Community Center (5679 Hollister Avenue) to learn about the study, talk to City staff, and give feedback on the City’s roadways and corridors, traffic conditions, and perception of safety.

The Goleta Traffic Safety Study Project is an opportunity for the City to review and evaluate the City’s major east-west and north-south corridors, including the major intersections, for things such as collision frequency and magnitude, roadway and intersection design configurations, and traffic volumes. A project team is currently analyzing and assessing the roadways. Their findings, combined with public input, will help construct an analysis which will include common factors in vehicular, bicycle, and pedestrian collisions, and address recommended safety improvements for vehicle lanes, bicycle lanes, and pedestrian crosswalks.

The Goleta Traffic Safety Study is funded through a $225,000 Systemic Safety Analysis Report (SSAR) Program grant the City received in January 2018. The final report will aid the City in pursuing further grant opportunities to assist in funding recommended improvements which have been identified. Additional information, including a map of the corridors, is available at https://tinyurl.com/GoletaTrafficSafetyStudy.