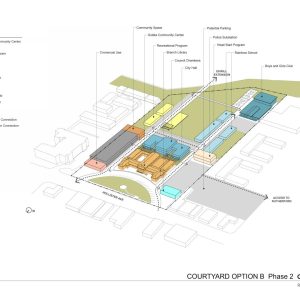 After numerous public meetings, the City Council finally had the opportunity to look at two distinct designs for a future City Hall at the current location of the Goleta Valley Community Center. The consultant presented two different design themes which the Council weighed in on.

The first design was dubbed the Courtyard Design for its connection of the existing Community Center building and a new City Hall building with a public courtyard. The second design would place City Hall to the west of the Community Center.

The City Council unanimously supported the “courtyard” design scheme and gave direction to City staff and architectural consultants about other uses that should be included in the property design.

Some of the Council’s suggestions included adding a new branch library, a police station and new recreational opportunities. These uses would be in addition to the existing Community Center uses.  Council also directed staff to look into a parking structure to accommodate the site needs as well as those of the commercial businesses in Old Town.

A final study is expected to be completed and presented to the City Council in February 2015 and will include more developed conceptual plans, as well as cost projections and funding options.  You can find additional information here.