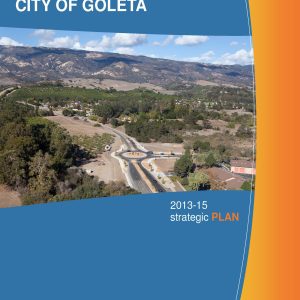 Goleta has a number of accomplishments to celebrate and we wanted to highlight our top ten for 2013.

1 – The Council adopted a new Strategic Plan which includes the following goals:

2 – The City remained financially stable.  This year the Council adopted a two-year budget that provides for numerous projects and expands staff and resources.  The City’s revenues have increased with the change in the revenue neutrality structure and the passage of Measure H (the increase in the City’s bed tax).  The City was also recognized for the 10th year in a row for its Excellence in Financial Reporting for its comprehensive annual financial report (CAFR), and once again finished the year “in the black.”

3 – Grant Funding. City staff sought out a number of grants to help supplement the funding options for the City’s projects.  Some of the grants received in 2013 included:

4 – Public safety continues to be a priority in Goleta.  The City received two signification recognitions this year: Goleta was named the 95th safest city in the US  and the 22nd safest city in California. The Council also allocated funding for a fourth motorcycle officer and was able to purchase four new motorcycles.

5 – Emergency Preparedness has been a focus over the last several years with the Goleta Prepare Now initiative.  In the last year the City has expanded the Community Emergency Response Team training opportunities and now has access to a new Emergency Communications Trailer through a partnership with MarBorg and Price Management.

6 – Litigation. The City successfully defended itself in lawsuits on Westar and the Monarch mobilehome park.

7 – Love of Goleta. Goletans really seem to love this community and we saw this through the Love of Goleta events in March.  Over 200 people participated in the community luncheon and workshop led by Peter Kageyama and several fun ideas came out of this evening.  The Dam Dinner in August brought together over 200 people for an informal dinner at the Lake Los Carneros Dam. The event was so successful that another one is being planned for August 23, 2014.  Follow the page on Facebook.

9 – The Goleta Entrepreneurial Magnet (GEM), a coalition of the City, the Goleta Valley Chamber of Commerce and UCSB, made substantial progress this year in hiring Doug Lynch as the executive director and launching a website.   The City Council also supported the concept for funding for three years and GEM is close to signing a lease for incubator space in Old Town.

10 – The Council approved a feasibility study for relocating City Hall to the existing Goleta Valley Community Center site.  Meanwhile interior improvements were made to the existing Council Chambers to improve the audio and visual experience for those in attendance and watching City meetings on TV and the web.

We are grateful for the achievements of 2013 and look forward to a great 2014.